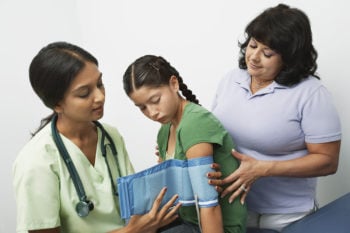 Over the last two decades, numerous research studies have firmly established the effectiveness of screening, brief intervention, and referral to treatment (SBIRT) in pediatric practices for alcohol and other substances in reducing underage drinking and its harmful consequences.

More recently, investigators have hypothesized that SBIRT might have broader effects on adolescent health. Alcohol and other substance problems among young people often co-occur with medical conditions and mental health problems, such as depression and anxiety. These conditions and problems are in turn associated with increased healthcare use, including costly emergency department and inpatient care.

To explore the possibility that SBIRT could impact those related problems and healthcare issues, National Institute on Alcohol Abuse and Alcoholism-supported scientists led by Stacy Sterling, Dr.P.H., of the Division of Research, Kaiser Permanente Northern California, examined the effects of SBIRT on subsequent healthcare use and comorbid health conditions among adolescents ages 12 to 18. Their study sample of nearly 2,000 young people was drawn from participants in a randomized clinical trial of two different ways of delivering SBIRT in pediatric primary care: (1) by a pediatrician or (2) by a behavioral clinician working with a pediatrician. Adolescents who received SBIRT were compared with a control group that received usual care by pediatricians who had access to screening tools but no formal SBIRT training.

As they reported in the journal Pediatrics, the researchers found that adolescents who received SBIRT had lower use of psychiatry services at both 1 and 3 years later and lower overall outpatient use at 3 years after receiving SBIRT. The authors write that those lower use rates are particularly notable because they serve as important proxy indicators of health and well-being.

The researchers also found that adolescents who received SBIRT were less likely to have a mental health or medical diagnosis at 1 year and less likely to have a substance use diagnosis at 3 years. The findings, they conclude, “suggest that offering SBIRT in pediatric primary care may have an enduring impact on both health and healthcare use during this critical developmental period. Future research is needed on the effects of SBIRT for adolescents on these important outcomes.”