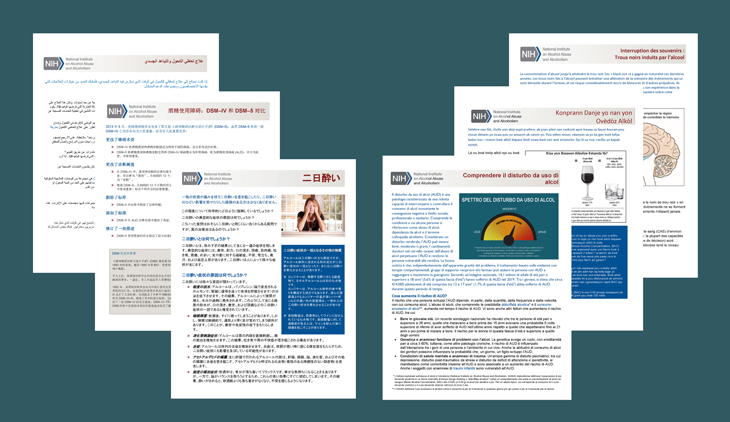 Providing information in multiple languages can help extend the reach of the National Institute on Alcohol Abuse and Alcoholism’s (NIAAA) resources. Many visitors to NIAAA’s website come from countries where languages such as Spanish, Tagalog, Japanese, and Chinese are spoken. In addition, Executive Order 13166, issued in 2000, called for all federal agencies to provide individuals with limited English proficiency meaningful access to their services. NIH and the Census Bureau have identified certain languages as being of greatest need.

In support of these policies and to expand access to educational materials to a broader audience, NIAAA now offers some of its popular evidence-based factsheets on alcohol and health—including Alcohol Use Disorder: A Comparison Between DSM-IV and DSM-5, Hangovers, Interrupted Memories: Alcohol-Induced Blackouts, Understanding Alcohol Use Disorder, and Understanding the Dangers of Alcohol Overdose—in the following languages:

Visit the NIAAA website to find these and other free resources, and please share them with your networks.