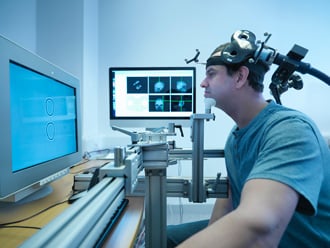 Recent studies have highlighted the potential of transcranial magnetic stimulation (TMS) as an innovative, safe, and cost-effective treatment for alcohol and other substance use disorders. A new review article by Antonello Bonci, M.D., of the National Institute on Drug Abuse (NIDA), with Lorenzo Leggio, M.D., Ph.D., of the National Institute on Alcohol Abuse and Alcoholism (NIAAA), and colleagues in the United States and Italy, addresses the scientific rationale for using repetitive TMS (rTMS) to treat patients with addictive disorders. Drawing on data from studies in animals and preliminary research in humans, the review suggests that rTMS of frontal brain regions may change specific brain circuits and lead to substantial changes in addictive behaviors.

TMS is a noninvasive method for delivering electric field pulses into the brain. The procedure involves holding a magnetic coil over the scalp so magnetic fields can efficiently pass through the skull, allowing strong currents into the underlying brain tissue. TMS can be used to either increase or decrease neuronal firing in targeted brain areas.

Delivering many TMS pulses in sequences can cause long-term brain changes that facilitate or impede the excitability of neurons. It is not completely understood how TMS induces these long-term neurophysiological changes. Although TMS is a relatively new approach to treating alcohol and other substance use disorders, it is currently an approved therapy for treatment-resistant depression.

Researchers have hypothesized that administering TMS can alleviate cocaine use disorder by strengthening activity in the dorsolateral prefrontal cortex (DLPFC), an area that regulates impulse control, and brain regions that receive input from the DLPFC.

Rodent studies have supported this hypothesis. Rats that compulsively sought cocaine stopped doing so when researchers experimentally increased activity levels in the prelimbic cortex, a subregion of the rat cortex that seems to share some functional similarities with the human DLPFC.

The review authors reported that TMS appears ready to be subjected to large, randomized controlled trials to test this promising approach to treating alcohol and other substance use disorders. They conclude, “Its mechanisms of action, which tap into the brain’s strong potential for functional reorganization, offer new hope for creating enduring changes to enable the rewiring of a brain system gone awry.”