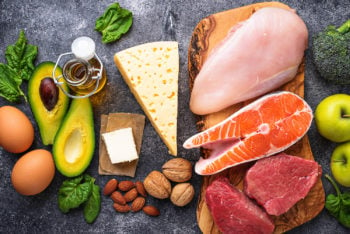 A diet high in fat and low in carbohydrates and protein, known as a ketogenic diet, may help reduce the severity of alcohol withdrawal symptoms in people being treated for alcohol use disorder (AUD), according to a new study led by researchers at the National Institute on Alcohol Abuse and Alcoholism (NIAAA) and the National Institute on Drug Abuse (NIDA). This study also showed that a history of a ketogenic diet reduced alcohol drinking in an animal model of AUD. A report of the study, led by Corinde Wiers, Ph.D., of the NIAAA Laboratory of Neuroimaging, and Leandro F. Vendruscolo, Pharm.D., Ph.D., of the NIDA Neurobiology of Addiction Section, with extramural and National Institutes of Health (NIH) colleagues including NIAAA Director George F. Koob, Ph.D., and NIDA Director Nora Volkow, M.D., appears in Science Advances.

The distressing symptoms of alcohol withdrawal are thought to perpetuate alcohol drinking and to contribute to relapse. As Dr. Wiers and colleagues noted in their paper, previous research has shown that chronic alcohol drinking increases the brain’s use of acetate—a metabolite of alcohol—and related compounds known as ketone bodies. During withdrawal, acetate levels decrease. This reduction is thought to contribute to alcohol withdrawal and even neurotoxicity. As a result, Dr. Wiers and colleagues hypothesized that increasing brain ketone bodies, including acetoacetate, via a ketogenic diet might dampen the effect of the withdrawal-related shift in brain metabolism. Ketogenic diets, which are high in fats, moderate in protein, and low in carbohydrates, increase ketone bodies and provide the brain with an alternative source of energy than glucose.

In the current study, the researchers found that participants with AUD who received the ketogenic diet required less medication to treat alcohol withdrawal symptoms during the first week of detoxification compared to participants with AUD who received a standard American diet. Over a 3-week treatment period, the ketogenic diet group also had reduced alcohol craving compared to the standard American diet group.

In a parallel, preclinical experiment conducted with a rat model of AUD, the researchers demonstrated that rats fed a regular diet escalated their alcohol consumption during acute withdrawal. However, rats made dependent on alcohol that were fed a ketogenic diet and later switched back to a regular diet did not escalate alcohol consumption and instead maintained alcohol intake at the levels of rats not made dependent on alcohol. Taken together, these findings point to the potential of a diet-based aid to treatment for AUD.