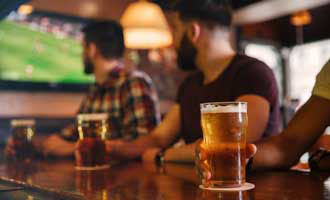 An NIAAA study shows that people who drink socially and have certain risk factors for alcohol use disorder (AUD) self-administer more alcohol and at a faster rate during a single laboratory session of alcohol consumption than people at low risk for developing AUD. Participants with all three risk factors evaluated in this study—being male, having a family history of AUD, and having higher impulsivity behaviors—had the highest rates of binge drinking. The findings suggest that people at risk for AUD have different drinking patterns than those at low risk.

The study, led by senior author Vijay Ramchandani, Ph.D., Chief of NIAAA’s Section on Human Psychopharmacology, and co-first authors Joshua Gowin, Ph.D., and Matthew Sloan, M.D., Postdoctoral Fellows in the Section, was published in The American Journal of Psychiatry.

NIAAA defines binge drinking as a pattern of drinking that brings blood alcohol concentration (BAC) to .08 g/dL. This typically occurs after 4 drinks for women and 5 drinks men — in about 2 hours. Binge drinking may be an early indicator for risk of developing AUD. Examining drinking behavior during individual drinking sessions may provide more clues for identifying individuals at risk for AUD.

To determine whether the examined AUD risk factors can predict the rate of binge drinking, 159 social drinkers between the ages of 21 and 45 completed assessments about family history of problem drinking, behavioral impulsivity, and level of response to alcohol. They then participated in a laboratory session in which they self-administered alcohol intravenously to mimic a typical drinking session with friends. The participants’ BACs were continuously estimated by computer and confirmed by breathalyzer every 15 minutes.

Participants who were identified as being at a higher risk for AUD administered alcohol faster, reaching binge-like BACs more quickly than those at a lower risk for developing AUD. Having a family history of AUD was most strongly associated with a faster rate of binge drinking. Participants with all three risk factors had the fastest rates of intravenous alcohol administration—five times faster—during a session, compared to the lowest risk group. Although more research is needed, the results suggest that, as part of a clinical exam, assessing binge drinking during individual drinking sessions may help identify individuals in need of early intervention.