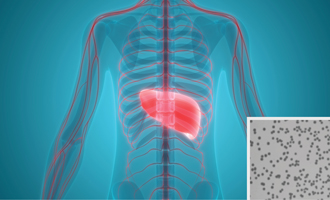 Alcohol is involved in nearly half of all liver disease deaths in the United States each year. Alcohol-associated liver disease (AALD) now replaces hepatitis C viral infection as the lead cause of liver transplantation due to chronic liver disease. Consequently, there is an urgent need for effective interventions for AALD, a complex disease with multiple contributing factors. One of these factors is the change in the levels and types of bacteria in the gut (known as gut microbiota) that occurs as a result of chronic alcohol misuse. In a new study funded by the National Institute on Alcohol Abuse and Alcoholism (NIAAA), a research team from the University of California, San Diego has identified an underlying mechanism for how alcohol-induced changes in gut microbiota may contribute to AALD. Building on this finding, the team demonstrated that engineered gut microbes could potentially provide a new treatment for AALD.

The research team, led by Bernd Schnabl, M.D., previously found that chronic alcohol consumption in animal models and in humans reduces the levels of an antimicrobial protein, known as regenerating family member 3 gamma (REG3G), in the intestines. The researchers’ studies in mice have shown that an increased level of REG3G protein in the intestine is protective against alcohol-induced liver injury. Making a connection between these findings and the knowledge that REG3G gene expression is regulated by interleukin 22 (IL22)—a type of immune system molecule called a cytokine, which regulates inflammation—Dr. Schnabl and colleagues investigated the effects of alcohol-induced gut microbiota changes on IL22 production and its role in AALD.

Using an animal model of AALD initially developed at NIAAA, the researchers found that alcohol reduces production of IL22 in the intestines by disrupting gut microbiota and lowering the levels of indole-3-acetic acid (IAA), a product of gut microbes. The researchers observed that administering IAA to mice in their food increased expression of IL22 and the REG3G gene and reduced the severity of alcoholic steatohepatitis. Alcoholic steatohepatitis is a type of liver disease characterized by liver inflammation and fat accumulation in liver cells.

Next, the researchers sought to restore intestinal production of IL22 and engineered a common gut bacterial strain to produce IL22. The bacteria were then fed to mice using the same animal model of AALD. Levels of IL22 and REG3G gene expression in the gut were restored and associated with a reduced severity of alcoholic steatohepatitis, when compared with mice fed unengineered bacteria. These findings suggest gut bacteria could be manipulated to produce IL22 as a potential treatment for AALD.